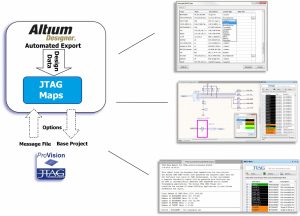 JTAG Technologies, the leading specialist in JTAG/boundary-scan solutions for board testing and device programming are excited to introduce their new collaborative product with Altium – JTAG Maps.

A large number of today’s electronic designs feature JTAG/boundary-scan components that provide valuable test resources during hardware debug, manufacturing test and even depot repair. JTAG Maps is a simple extension to the Altium Designer tool suite that allows the user/engineer to thoroughly assess the capabilities of the JTAG/boundary-scan resources on their design – before committing to layout.

Until now engineers could often spend hours highlighting the boundary-scan nets of a design manually to assess the fault coverage that boundary-scan testing could bring a specific design. Today the free JTAG Maps for Altium, application extension, does all this and more, freeing up valuable time, allowing a more thorough DfT and speeding time to market.

JTAG Maps for Altium will automatically detect the scan chain path (or paths) with no limits to the number of paths (aka TAPs) in the design. The nets associated with the TAPs will be highlighted separately from the ‘testable’ nets using different colors.

While most users will want to simply use the quick coverage report that JTAG Maps for Altium can provide, it is still possible to import a more accurate picture.

After exporting a JTAG ProVision project, the data can be sent to your local JTAG Technologies office, Approved Application Provider, or approved JTAG representative for further analysis. A simple message file containing full fault-coverage information can then be read back into JTAG Maps for display/highlighting.